Bacolod in 34 steps (and bites)

Until I went abroad for graduate school in the mid-1980s, summer vacations meant decamping en masse with my siblings and fellow Manila-based first cousins in Negros Occidental.

There, for almost two months of the year, we would meld into our larger Visayan clan: a joyful assortment of more cousins, uncles, aunts, grandparents and extended family based in and around Bacolod, Silay, and Talisay.

All of us trace our ancestral roots back to Iloilo. It was from here that, in the mid-18th century, the British diplomat and businessman Nicholas Loney kick-started the growth of the Philippine sugar industry. This would lead to a wave of migration among numerous Iloilo sons and daughters, sometimes entire families, to Negros Occidental.

Things have moved on since the commodity’s heyday. But today’s pioneering Negrenses have turned the “Sugar Bowl of the Philippines” into more than a “City of Smiles,” perhaps something even sweeter.

While vestiges of the past are preserved and venerated—as a tribe, the Negrenses appreciate the value of their remaining ancestral homes, antique churches and heirloom recipes—there are jewels of contemporary Bacolod and Negros, too.

Following is a list of only 34 of the land’s best kept and the not-so-well-kept secrets to whet a visitor’s appetite, nominated by true blue Negrenses and Ilonggos. Take note: it’s not meant to be comprehensive (Silay alone has over 30 heritage buildings!). But hopefully, it can serve as a useful blueprint.

Once occupied by Gen. Douglas MacArthur, this Silay heritage house built in 1939 recently hosted the 20th Silay Adobo Festival and will be the venue for the forthcoming Slow Food Negros’ Terra Madre Day. The food associations are clear: Doreen Gamboa Fernandez, the late legendary food writer, grew up here as the daughter of sugar planter Aguinaldo Severino Gamboa. The house is now also listed on Airbnb.

Locally known as the “Boat House” because of its nautical accents and features, this marble-filled, visually arresting streamlined art deco mansion built by “visionary” sugar planter Generoso Villanueva in 1936 as a family home (their “Daku Balay”), still dominates Burgos Street.

A haunting sight on a moonlit night, the picture-perfect “Ruins” in Talisay is many a Negrense’s pride and joy, the almost default heritage site. The 1920s Italianate mansion was built amid the sugarcane fields by Mariano Ledesma Lacson to honor his late wife, Maria Braga Lacson.

The original structure, however, was set alight by guerrillas during World War II. A deeply romantic back story has brought The Ruins fame as the Philippines’ Taj Mahal.

Otherwise known as the Victor Fernandez Gaston Ancestral House or simply the “Gaston house,” the bahay na bato (stone house) Balay Negrense was built in Silay in 1897 by sugar planter Victor Fernandez Gaston for his wife and 12 children. It was the very first museum established in Negros Occidental, and was acquired nearly 30 years ago by the Negros Cultural Foundation).

Even the locals are highly impressed by its plethora of antique furniture, historical artefacts and ambience.

Built in Talisay in 1883 by Efigenio Lizares and his wife Enrica Labayen Alunan Lizares (the “Tana Dicang”), this expansive bahay na bato structure is a masterplan and compendium of the sugar planter’s culture and lifestyle.

It was curated, along with an art gallery, by their great grandson Adjie Lizares.

Also known as the “Pink House”, this museum was completed in Silay in 1908 by sugar planter Bernardino Jalandoni and his wife Ysabel Lopez Ledesma Jalandoni, who migrated from Iloilo (Jaro) to Silay. This unmissable structure (“it really grabs attention”) boasts of an antique ice box that was used for the ice transported all the way from United States by steamboat.

The first ancestral house in Silay to open its doors to the public was built by sugar planter Manuel Severino Hofileña and his wife, Gilda Ledesma Hojilla in 1934. The engaging current owner, Ramon “Mon” Hofileña, talks visitors through the family’s unusual sets of curios and invaluable collection of artworks by the likes of Joya and Amorsolo.

Pulupandan may be relatively small in area but the Montilla Ancestral House, and the family itself, loom large in the annals of Negrense history. This massive bahay na bato was built in a hacienda in the middle of the 19th century by one of Negros’ first sugar barons, Agustin Montilla y Orendain, a Spaniard born in the Philippines who with his wife from Iloilo, Vicenta Yanzon y Locsin-Zarandin, raised eight children.

Facing Silay’s main plaza and diagonally opposite the Romanesque San Diego pro-Cathedral, this sprawling “streetwise townhouse” property recently made waves when it was adapted into a gleaming new McDonald’s Restaurant, one of only three in the Philippines converted from heritage houses. Previously, the ground floor was occupied by a suite of shops, and the top floor that had once served as the Sian residence (before the family built a new home in Bacolod) had enough space for children to ride their bicycles and play basketball.

As much a tourist attraction as the seat of local government, Bacolod’s majestic city hall opened its doors to the public a decade ago. The edifice fills many Negrenses with pride with an architecture reminiscent of the White House in Washington D.C. It is quite spectacular and colorful especially during Bacolod’s annual Masskara Festival.

It is a quirky, private cemetery in Bacolod, set on an island floating between two major streets (Lopez Jaena and Burgos Streets). It is owned by the Ruiz de Luzuriaga family, descendants of Eusebio Ruiz de Luzuriaga, a Spanish colonel who settled in Bacolod in the mid-1800s to live the life of a prosperous sugar planter. So unusual is it, that the cemetery has appeared in both the Guinness Book of World Records and Ripley’s Believe It or Not.

This public park within the Negros Occidental Provincial Capitol complex in Bacolod was designed by Juan Arellano. Overlooking the lagoon are a pair of “carabao statues” by the Italian sculptor Francesco Riccardo Monti, the objects of special Negrense affection. The capitol building itself now houses another carabao sculpture, called “Bao.”

13 and 14. Monuments of Colonel Juan Araneta in Bago, and Aniceto Lacson in Talisay

These memorials commemorated the bravery of the two leaders of the 1898 Negros Revolution against the Spaniards, known as Cinco de Noviembre. The following day, the Spaniards then surrendered to the rebel forces under native sons Juan Araneta and Aniceto Lacson in Bacolod.

The vintage steam locomotive trains that once chugged through Negros to sugar centrals such as Victorias Milling Co., Hawaiian-Philippine Co., and Central Azucarera de Carlota are now stationary and silent. But once, they were indispensable to the sugar industry, transporting sugarcane during the milling season. Still a sight to behold.

It is another source of pride for the Negrenses. When the sugar industry collapsed, 15 enterprising Negrense women had set up a foundation to help provide sugar workers with an alternative source of income. The Association of Negros Producers is their legacy, and now promotes the best of Negros produce and craftsmanship. Located near Robinsons Place, Bacolod, Negros Showroom is great for souvenir shopping, a one-stop shop for everything from local delicacies to homewares, clothes and handicrafts.

Located near the provincial capitol, this conservation park was first established in 1986 and is still somewhat a “hidden gem.” Formerly known as the Negros Forest and Ecological Foundation, it aims to raise awareness of Negros’ biodiversity and provide a haven and breeding ground for endangered species and wildlife.

A 43-hectare marine reserve and wildlife sanctuary on the southwestern coast of Negros Occidental, the island’s many coral reefs make it a popular scuba diving destination. It is aimed at tourists “eager to experience nature at its purest.”

Nestled in the the foothills of Mount Kanlaon is Mambukal, an old favorite among Negrenses, many of whom have fond memories of family trips frolicking in the hot springs/sulfur pools or underneath waterfalls.

The intriguing altar mural of an “angry Christ” is by artist Alfonso Ossorio, member of a founding family of Victorias Milling Co. and collaborator of the American painter Jackson Pollock. Visitors are often drawn to Victorias for the sole purpose of gazing (or gawping) at the painting. The church is actually called the Chapel of St. Joseph the Worker.

The 19th century seat of the Roman Catholic Diocese of Bacolod is built on coral stone from Guimaras Island with a prime position across the main plaza. First incarnated as a small wooden church, it was declared a cathedral in 1933. Two mounted antique belfries set on the grounds add to the sense of grandeur.

It is considered by some Negrenses as by far the most beautiful church in Bacolod, and often referred to as simply “the Chinese Church.” The main altar piece is Maximo Vicente’s sculpture of the Queen of Peace. One remembers their doorbell chimes being used as the consecration bell.

Don’t be deceived by the streamlined exterior. The chapel inside Bacolod’s Sta. Clara subdivision is distinguished by its unique mother of pearl and capiz shell mosaic depicting Madonna and Child.

Restaurants, food and every delicacy

The oldest restaurant in Negros, which originated in the 1920s, still stands today at the ancestral home of Carlos Lacson Locsin in Silay. Its Guapple Pie is legend and here, people flock for the fresh lumpia, spareribs and chicken sandwiches.

How many burgers, sate babis and chicken sandwiches can you put away in one go? For my generation, it will always be Bob’s Big Boy, a slice of suburban America moments from Capitolville Subdivision. Now on its 54th year, it has a number of branches around Bacolod.

I declare an interest as it’s run by a Consing cousin. But Calea has really built a wonderful reputation for its well-priced cakes and pastries, and an imported chocolate cake that is a runaway best-seller.

For the best batchoy and an atmosphere to match any big city restaurant, it’s hard to beat 21 Restaurant, a smart family affair specializing in seafood and Ilonggo favorites. Executive Chef Ritchie Gamboa keeps a close eye on his kitchen brigade and it shows.

It’s an old reliable, famous for its comfort food. Some say no trip to Bacolod will be complete without stopping here.

A relative newcomer to the Bacolod dining scene, and with many ingredients sourced from Europe, Delicioso has developed a fine reputation among Negrense gourmands.

The grilled, marinated Negros delicacy that is chicken inasal first found a home in Bacolod’s Chicken House. Before, it was only sold on sidewalks. Many Negrenses still swear by Chicken House (also for their pork spare ribs), although others might prefer the choices found in Manokan Country, a veritable arcade of chicken inasal stalls. Bob’s does a good take on this all-time favorite, too.

Sponge cakes with smooth, creamy egg custard on top, shaped like half moons, can only come from Pendy’s, the Bacolod restaurant that evolved from a supermarket into the institution it is today.

Felicia’s in Bacolod is the place to go for the cheesy ensaymadas that set many Negrenses drooling.

Bailon’s Piaya is the last word in piaya—the wafer-thin muscovado-filled toasted flatbread that even my late Dad was addicted to.

For locals, the best and original Napoleones—a light, layered pastry with custard cream filling topped with a sugar glaze—can only be found in Roli’s, also known for their chicken sandwiches (yes, clearly the ultimate childhood favorite), and pancit palabok. 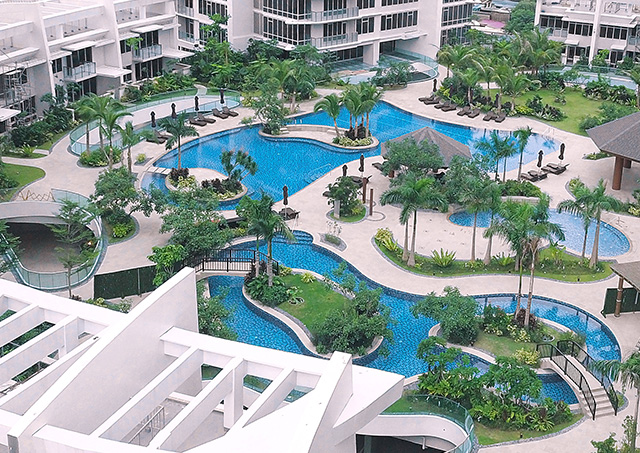 The Proscenium at Rockwell Reimagines Luxury Living With Its Unique Amenities

Rockwell Land: We continue to be of service

In line with the Code Red Sublevel 2 declaration on COVID-19, we assure you that Rockwell is doing its part to mitigate risk and prioritize the safety of all its valued stakeholders.

Thank you and we truly appreciate your kind understanding! 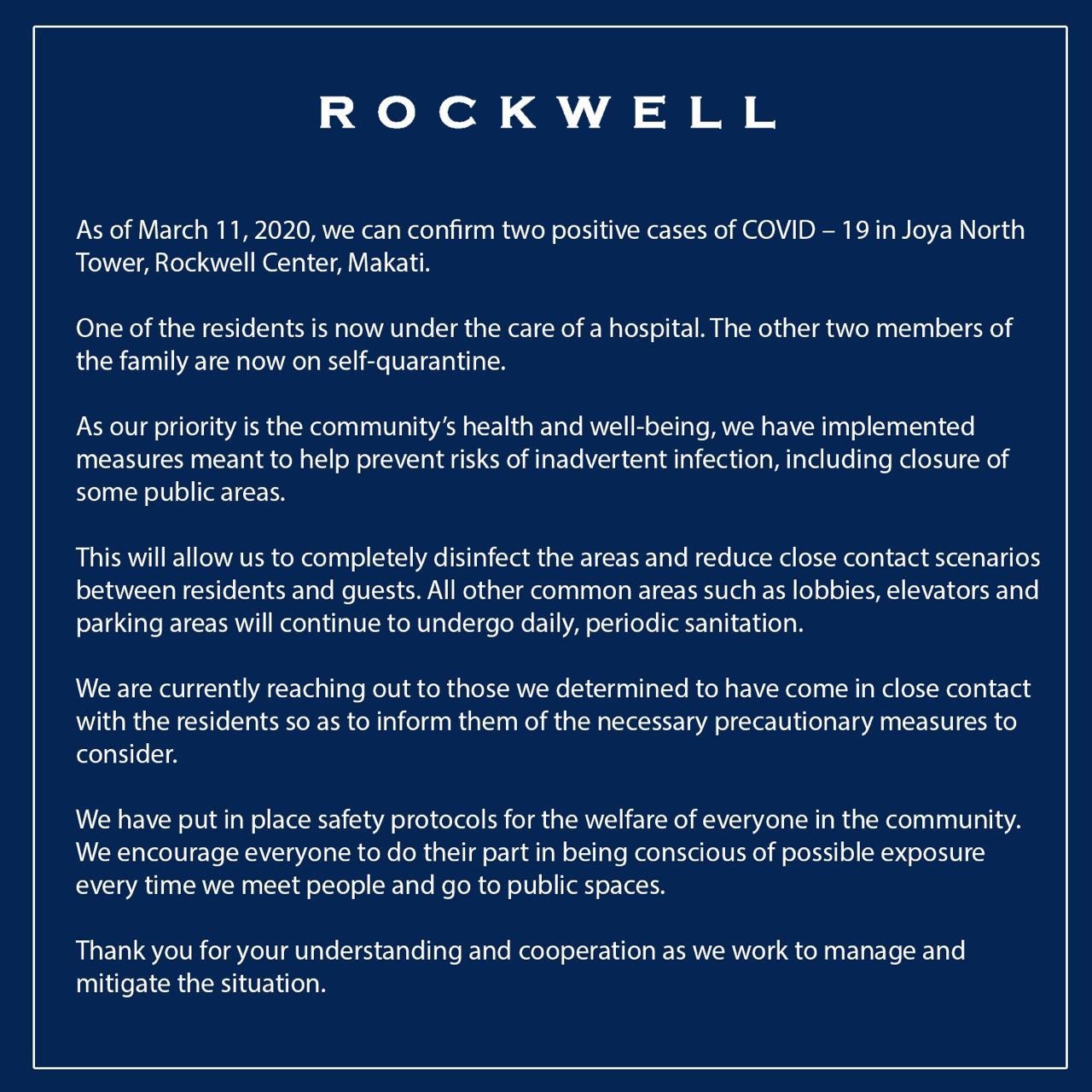 As we prioritize the community’s health and well-being, we continue to intensify safety and security measures across all Rockwell properties. Thank you for your understanding and cooperation as we mitigate the situation.